Categories:AnnouncementsConcerts
by Kat Cannella |
on March 11, 2020 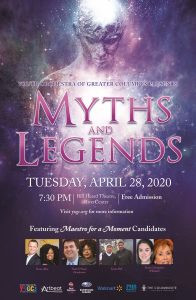 March 11, 2020, Columbus, Georgia—Youth Orchestra of Greater Columbus (YOGC) reveals this year’s Maestro for a Moment candidates, duos of community leaders who volunteer their time and energy fundraising to support YOGC programs and operations. The team raising the most money wins the honor of being “Maestro for a Moment” and conducts the concert finale. The concert, inspired by mythology and heroes of legend, will be held Tuesday, April 28th 2020 in Bill Heard Theatre of RiverCenter for the Performing Arts at 7:30 PM.

This performance closes the season and is the Youth Orchestra’s most widely recognized event. The Maestro for a Moment campaign generates thousands of dollars in gifts that directly support student musicians via scholarships, professional coaches, and other operating expenses. The four teams participating this year include:

The community can vote for their desired Maestros for a Moment at yogc.org where $1.00 equals one vote. Voting is encouraged early and often, and votes can be made online or in person until the concert begins.

“The Columbus community continues to turn out to support YOGC every year during our Maestro for a Moment campaign, and this year is no different. We’ve already raised almost $1,500 that we turn right back around to support YOGC’s five programs that run for ten months out of the year and directly impact almost 350 children within the Chattahoochee Valley region. Your support is vital. Share the message with your friends. Attend our concerts. Donate to your favorite team. Your support helps us cultivate amazing children who blossom into our community’s future leaders.” – Stephanie Payne, YOGC Executive Director

Since 1993, the Youth Orchestra of Greater Columbus has been teaching the area’s most talented young musicians. Led by music director Jim Palmer, YOGC maintains the only symphonic orchestral opportunity in the region for string, brass, wind, and percussion musicians; a string orchestra for intermediate string players; five chamber groups; an orchestra festival provided at no cost to MCSD school orchestra programs; and a week-long summer string camp focused on alternative genres of music and playing styles. Rehearsals are held each Monday evening during the school season at the CSU Schwob School of Music.  For additional information e-mail info@yogc.org.