Categories:Announcements
by Kat Cannella |
on February 18, 2020 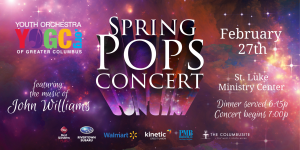 February 18, 2020, Columbus, Georgia—The Youth Orchestra of Greater Columbus (YOGC) will feature the music of John Williams during their Spring Pops Concert. This year’s Maestro for a Moment candidates will also be revealed. Hosted at the St. Luke Ministry Center, the concert begins at 7:00p on Thursday, February 27, and includes dinner at 6:15p prior to the performance. Tickets are available at yogc.org.

John Williams is the composer of many of the most recognizable themes ever written for the silver screen, and arguably one of the greatest film composers of all time. Credits include blockbusters such as Star Wars, Jaws, Indiana Jones, E.T. the Extra Terrestrial, Home Alone and the first three Harry Potter films.

YOGC is also excited to reveal this year’s Maestro for a Moment candidates, who can begin fundraising after the concert concludes. The winning team gets the honor of conducting the concert finale in the season closing concert, on April 28th, 2020.

”This music transports you to times spent with loved ones curled up with some popcorn and going on epic adventures with some of our favorite characters. This event mimics those times. Have dinner with some of your favorite people and see a live performance of these film classics. I think we all want more quality time like that with our friends and family.” – Stephanie Payne, YOGC Executive Director

Since 1993, the Youth Orchestra of Greater Columbus has been teaching the area’s most talented young musicians. Led by music director Jim Palmer, YOGC maintains the only symphonic orchestral opportunity in the region for string, brass, wind, and percussion musicians; a string orchestra for intermediate string players; five chamber groups; an orchestra festival provided at no cost to MCSD school orchestra programs; and a week-long summer string camp focused on alternative genres of music and playing styles. Rehearsals are held each Monday evening during the school season at the CSU Schwob School of Music.  For additional information e-mail info@yogc.org.