Team Young Professionals campaigning to be the next Maestro for a Moment! 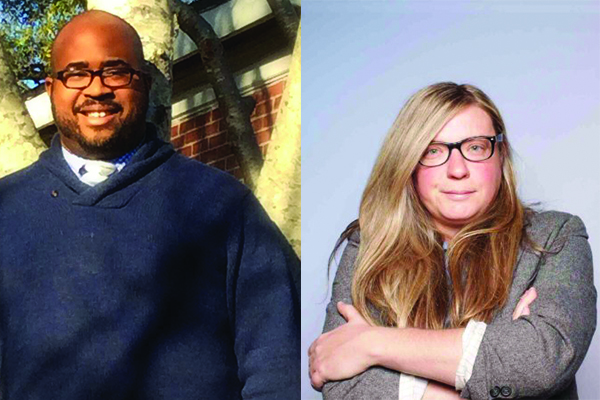 Categories:News
by |
on April 3, 2017
Team Young Professionals, Carla Gridley and Isiah Harper, are the third team competing for your vote to be the next Maestro for a Moment.  The winning team will conduct the finale on April 18th during the Maestro for a Moment concert. Carla and Isiah met on a Muscogee County School District school bus in 1996. By some wiggling of lines, these two young souls were ferried daily from BFE (i.e. Midland, Georgia in the 90s) all the way inland to the majestic halls of Hardaway High School. #GoHawks!

They spent their formative years in a building known simply as “The Hut.” It was a detached portable that housed a myriad of melodramatic misfits and their extra “theatrical” teenage melodramas. If you found yourself there before school, after school, or even during lunch you were one of Brinker’s babies. And if you were one of Brinker’s babies, you received an artistic education like no other.

The expansive reach of Lisa Brinker’s influence transcended the typical with Isiah though. In him, she nurtured a passion for teaching that has gone on to serve Columbus and the Muscogee County School District for almost 15 years.

About Team Young Professionals:
Carla Gridley is a local and a transplant. She grew up an “Army Brat” and Fort Benning was the only place her family was ever stationed twice. At 18, she said to herself, “Oh look, a college…and I don’t ever have to move again!” And thus ended the nomadic existence of Carla Gridley.

Since deciding to make Columbus, Georgia, her home, she has graduated from Columbus State University with two degrees (a Bachelor’s of Fine Arts in Theatre and a Master’s of Business Administration), been elected Student Body President of Columbus State University, and spent the better part of a decade working in the Marketing Department of the not-for-profit organization RiverCenter for the Performing Arts. She now brings this decade’s worth of marketing experience to the real estate industry and looks forward to assisting clients to market their homes. But buyers fear not! Carla also enjoys showing newbies around town. She’s been embedded in the community since 1995 and will make sure to tell you where you can find the best steak, burger, pizza, etc. in town. You pick your poison, and she’ll make sure to show you a home within spitting distance! Or just a short drive…whichever you prefer.

Carla served three consecutive terms as Treasurer of the Board of the Columbus Ballet, and was a long-standing member of the River Valley Regional Commission’s Bicycle and Pedestrian Planning Committee, a spotty member of the Board of Bicycle Columbus (lunch meetings are tough when you forget to take a lunch break), and spent nine long years trying to wake up on time so as not to miss a monthly 9:00 a.m. meeting of the Columbus Cultural Arts Alliance. #notamorningperson #allthecoffee

*”As a marketing person, I enjoy a good rebrand as much as the next guy, but there’s just something about being called a YAP that doesn’t feel quite right.” – Carla Gridley

She now heads up the marketing efforts of the nation’s fourth largest provider of child care— Childcare Network.

Carla Gridley’s LinkedIn Account:
https://www.linkedin.com/in/carlagridley/
Isiah Harper is also extremely active with the local non-profit arts community. He has danced with, taught at, and served as President of the Board of the Columbus Ballet Conservatory; served on the Board of the Columbus Jazz Society and RiverCenter for the Performing Arts; and currently, he is the Fine Arts Chair and the Director of Theatre at Northside High School, and the Director of Summer Theatre at Girls Inc., Columbus.
Mr. Harper has been acknowledged as one of the Top Three teachers in both Muscogee County and the tri-city area by the Muscogee Educational Excellence Foundation.

Maestro for a Moment is not Isiah and Carla’s first collaboration with the Youth of Orchestra of Greater Columbus. During their tenure on the Board of the Columbus Ballet, Isiah and Carla spearheaded an initiative that partnered the Columbus Ballet’s performance of The Nutcracker with live orchestration by the YOGC. That year it was the only all-youth performance of The Nutcracker in the nation.