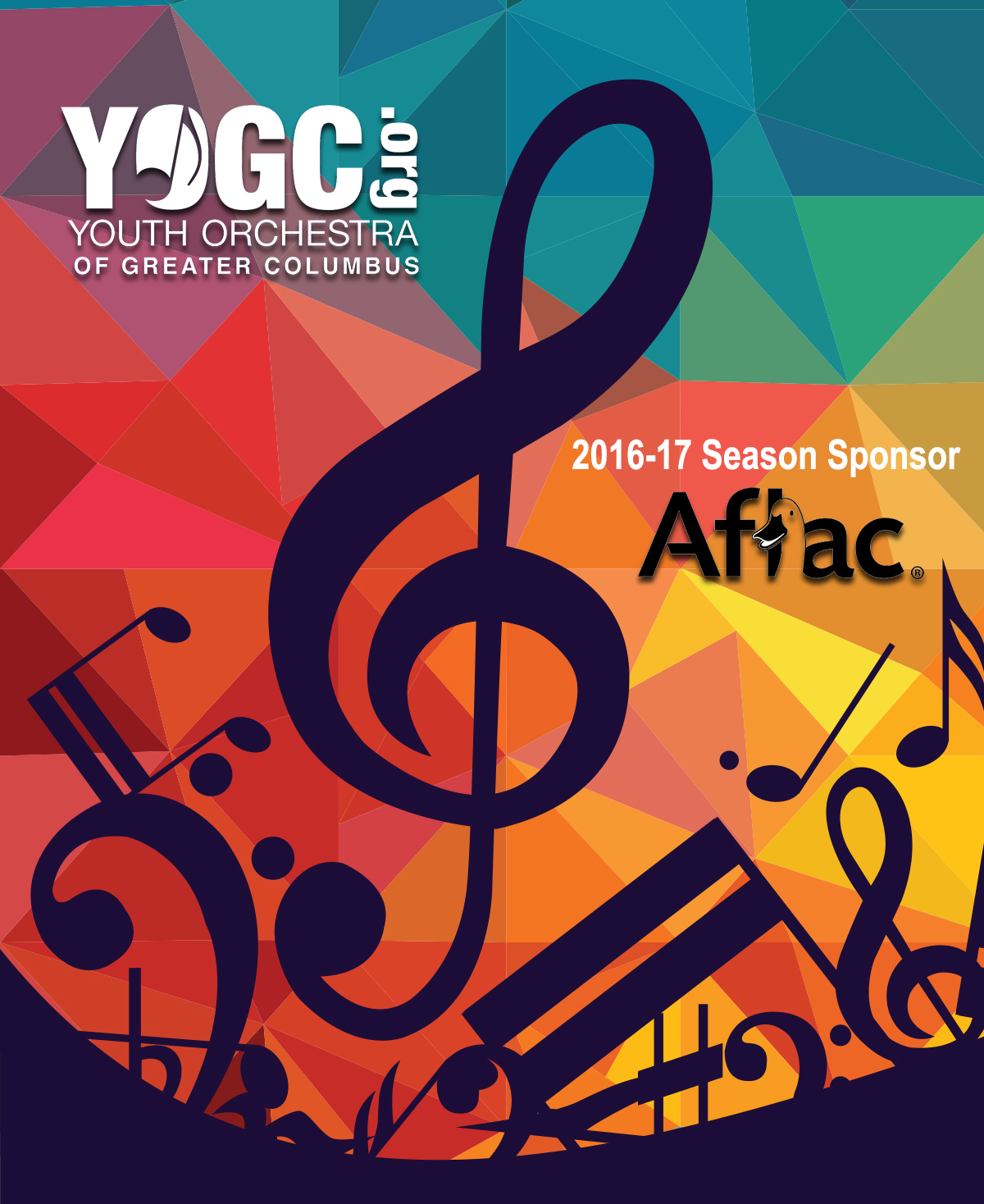 August 31, 2016, Columbus, Georgia—The Youth Orchestra of Greater Columbus (YOGC) is pleased to announce Aflac will be its 2016-17 season sponsor. The Youth Orchestra, led by Music Director and Conductor Jim Palmer, is made up of intermediate and advanced string, brass, wind and percussion musicians; a String Orchestra composed of young string players, chamber groups; ensembles including a percussion ensemble, two string quartets, a woodwind quintet, a brass quintet, and a violin ensemble. For more information about the Youth Orchestra of Greater Columbus visit www.YOGC.org or call 706.256.3614.

YOGC is thrilled to partner with Aflac for the second year. As season sponsor, Aflac serves a vital role in providing YOGC students with music, coaches, performance space, and all of the other things that make YOGC a success. Their generous support allows us to keep tuition at a low rate and focus on serving the children. Thank you, Aflac, for your support.

A Harvest of Sound

Join us for a fall concert with a bountiful harvest of music, an art auction filled with paintings, photos and drawings from the Columbus Artists’ Guild, and the latest cars from Rivertown Subaru on display. This concert is sponsored by Rivertown Subaru.

A Tale of Four Trees with narration – Bob Phillips

The Plow that Broke the Plains with narration – Virgil Thompson

Side by Side with the Columbus Symphony Orchestra

Youth Orchestra students will study and work side by side with professional musicians from the Columbus Symphony Orchestra. Each student musician will perform alongside a CSO musician during a concert. This concert is sponsored by the Columbus Cultural Arts Alliance and the Columbus Convention and Visitors Bureau.

Tickets: To Be Announced

Join us for great music, dinner, and meet and hear from the Maestro for a Moment candidates.

This recital is the opportunity for students in YOGC’s two string quartets, woodwind quintet, brass quintet, percussion ensemble, and violin ensemble to show off the hard work they have put in throughout the season. These leaders have worked together to develop a cohesive ensemble and often perform without a conductor. Groups will perform music by many different composers, time periods, and styles.

Maestro for a Moment

This concert is the final concert of the Youth Orchestra’s season and the end of the Maestro candidates run for Maestro for a Moment.  The winning candidate is announced during the concert and the will conduct the finale.

Summer String Camp is sponsored by the Georgia Council for the Arts and the National Endowment for the Arts.

Summer String Camp is an opportunity for all string instrument musicians from beginners (at least one year of school orchestra or private lessons) to intermediate and advanced to further develop their abilities by working with some of the finest musicians and music educators. The schedule will offer daily ensemble rehearsals, alternative studies, technique classes and music theory and composition. A concert will follow the week of intense musical instruction in Legacy Hall at RiverCenter.

Since 1993, the Youth Orchestra of Greater Columbus has been teaching the area’s most talented young musicians. Led by music director James Palmer, this outstanding orchestra program includes the Youth Orchestra made up of intermediate and advanced string, brass, wind and percussion musicians, the String Orchestra composed of young string players, chamber groups, ensembles including a percussion ensemble, two string quartets, a woodwind quintet, a brass quintet, and a violin ensemble, and a summer string camp. Rehearsals are held each Monday evening during the school season at the RiverCenter for the Performing Arts. Visit www.YOGC.org for audition requirements and an application for the 2016-17 regular orchestra season.  For additional information e-mail info@yogc.org.